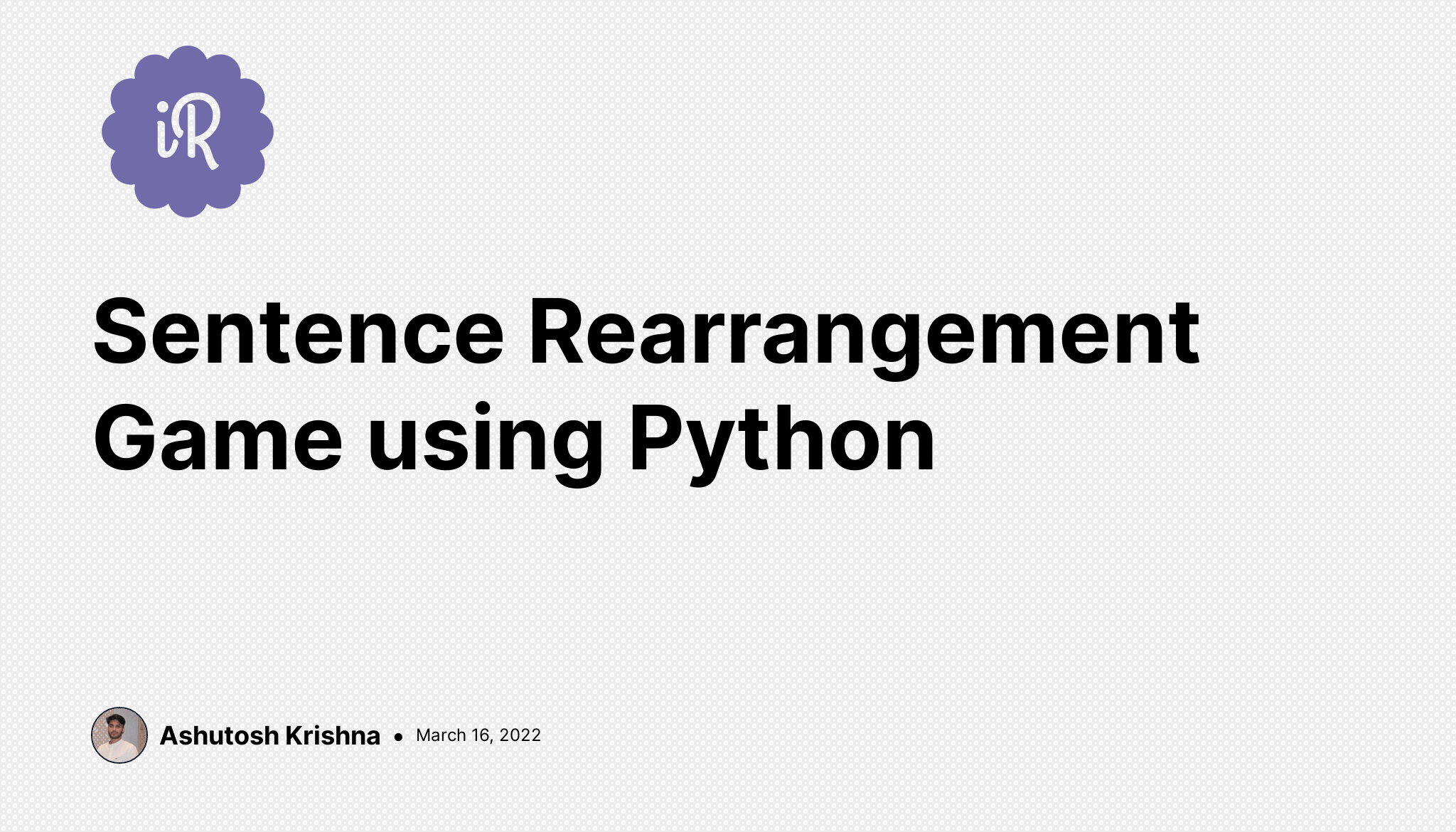 During your childhood, you might have done this exercise where you were required to rearrange words to make a meaningful sentence. I cannot say anything about you, but I had done this quite a lot in my English classes.

In the project, we'll be using the Rich library to make the terminal colorful. If you don't wish to use it, you can ignore it. To install Rich, use the command:

To know more about Rich, read this tutorial.

Let us jump directly to the coding part and discuss what we have done.

First of all, create a text file called sentences.txt and add the following content there:

We'll be using the above sentences further.

Next, create a main.py file and add the following content in it.

Here we have three functions : get_sentences(), get_jumbled() and game(). Let's discuss each of them now.

This function takes a filename as the parameter. It then reads the text file and creates a list of unique sentences and returns it. We are using the set() function to remove duplicates from the list. There are several other methods to do the same too.

This function takes a sentence as the parameter. First, it splits the sentence and shuffles it using the shuffle() function from the random library. Then it joins the shuffled words using ' / '.

For example, if we pass a sentence like " This is a sweet mango.". It can return something like " mango / a / sweet / is / This". Thus we obtain a jumbled sentence.

This function takes a number_of_questions parameter for the total number of questions to be asked. We have used three variables - game_is_continued for the while loop, score for the total score calculation and count to count the number of questions that have been asked. Now, we start a while loop. Inside the while loop, first of all, we randomly choose a sentence from the sentences list obtained from the get_sentences() function and store it in a correct_sentence variable. Then we create the jumbled sentence for it using the get_jumbled() function. Next, we ask the user for the answer and store it in a user_sentence variable. Then we compare the user's answer with the correct answer (ignoring the case). If it's correct, we increase the score by 1. Since one iteration (or question) is complete, we increase our counter variable count by 1. At this stage, we check if the count is equal to the number_of_questions, i.e., the number of questions already asked is equal to the number of questions to be asked, then we break the loop by setting the game_is_continued variable to False. In the end, we just return the score.

Notice that we have used console.print() at most places. If you don't wish to use Rich, you can replace those statements with simple print() statements.

Oops, looks like I made a typo in the second answer 😭. Didn't notice it? Look at the spelling of lawyer in my answer.

Anyways, our code is working fine!!

Hope you liked this mini tutorial where we built a CLI-based game.