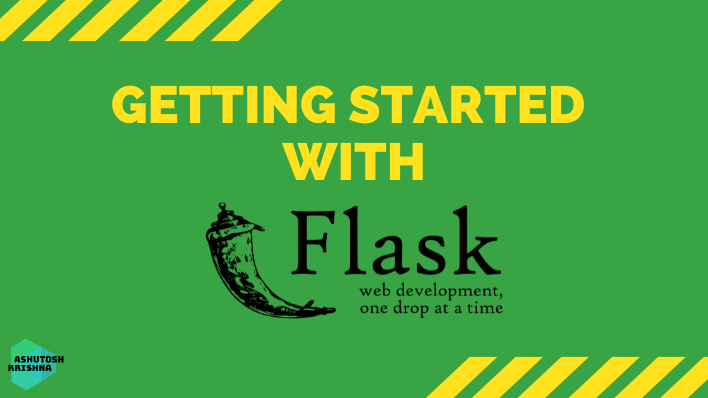 Getting Started With Flask

Flask is a simple, easy-to-use microframework for Python that can help build scalable and secure web applications. It's easy to set up and is being supported by a large community. Thus it is considered quite easy to get started with Flask rather than other Python web frameworks like Django. It's also flexible enough, so if you want more functionality, you can add more extensions.

Before you install Flask, make sure you have Python installed in your system. You can check using the python command as given below:

If you didn't get similar output, download and install Python from here.

The above command will create a virtual environment named env. Now, we need to activate the environment using the command:

To verify if the environment has been activated or not, you can see (env) in your terminal.

After you have activated the environment, you are ready to install Flask with the below pip command:

This will install Flask and few other dependencies that come with it. To check what all has been installed, you can run the below command:

We can also put these all into a requirements.txt file using the command:

If you check the official documentation of Flask, you'll find a minimal application there. But as discussed above, we're not going to follow that. But we are going to write an application that is more extensible and has a good base structure for even larger applications. So, let's dive in.

Our application will exist within a package called core. To convert a usual directory to Python package, we just need to include a __init__.py file. So, let's create our core package first.

After that, let's create the __init__.py file inside the core directory:

Now that the required file has been created, we can add the following content there:

In the above Python script, we are first importing the Flask class from the flask module that we have installed. Next, we're creating an object app of class Flask. We use the __name__ argument to indicate the app's module or package so that Flask knows where to find other files such as templates.

In the above script, we first imported the app object from the core package. Further, we're creating a Python function called say_hello() which just returns a string "Hello World!". This function, or view function, is mapped with a URL "/" using @app.route decorator. It means, whenever someone visits the "/" route, say_hello() method is responsible to handle the request.

Now that we have a route created, let's import it in the a __init__.py file as:

In the above script, we just imported the routes from core package. The thing that needs to be noticed is, we did this at the bottom of the file and not at the top. This is done just to avoid a common problem of circular imports in Python.

Now, we have done most of the things. We just need a top-level Python script to run the application. So, outside the core package, create a main.py file and add the following content:

In the above script, we first imported the app object from the core package. Then inside the Python main method, we are running the app using the run method. By enabling debug mode using debug=True, the server will automatically reload if code changes, and will show an interactive debugger in the browser if an error occurs during a request.

Warning: The debugger allows executing arbitrary Python code from the browser. It is protected by a pin, but still represents a major security risk. Do not run the development server or debugger in a production environment.

Now, we are ready to run our first application in Flask. And, we can run the server just as we run a Python file using the python main.py command:

Once, you run the server, you'll get the above output. You'll find a URL in the last line. If you open that in your browser, you will be welcomed with a Hello World! message.

To build a web application, we need more than just routes. We need HTML files, static files such as CSS files, Javascript files and images, database models, and other configurations.

In the config.py file, let's add the following content.

So far, we have created a simple Hello World application. Also, we saw how various files are organized to form a good base structure. In the next blog, we'll create a News Application and make use of the static and templates directory there. Till then, stay tuned!